The Nigeria System of Government is modeled after the America System, and it is preserved in the 1999 Constitution. The Presidential System is built on the doctrine of separation of powers which was absent in the Parliamentary system that we inherited from Britain. The doctrine of separation of power is based on the fact that the functions of the three organs of Government: Legislative, Executive and Judiciary should be exercised by separate bodies for checks and balances and to avert mis-governance; no two functions should be entrusted on any one organ or body.

Nigeria under the presidential system of government have three tiers of governance namely: Federal, State and Local Government. Each tier of Government consist of three organs; the Legislative, the Executive and the Judiciary. Section 4(6) and (7) of the 1999 Constitution of the Federal Republic of Nigeria as amended empowers the State Legislature to make Laws for the peace, order and good governance of the State or any part thereof.

Ogun State House of Assembly which is the Legislative Arm of Governemt was established with the inauguration of the 1st Legislature on the 2nd October, 1979 and the tenure which lasted till October, 1983 passed 40 Bills.

The 2nd Legislature had the shortest tenure which was between October 1983 and December, 31st 1983 (3 months), and it was truncated by a Military Coup D'etat before it could pass any Bill. 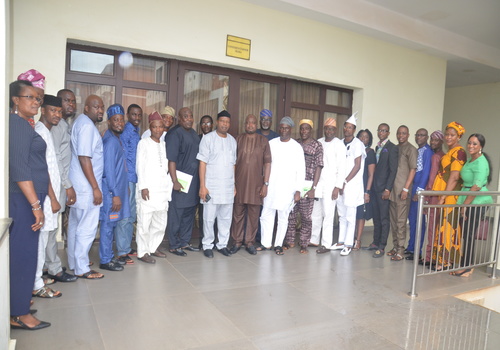 To build a virile, proactive and purposeful Legislature that will be a model within and beyond the shores of Nigeria

To strive at all times by way of motions, resolutions, legislations and true representation to enhance the quality of life of the people in all the Constituencies of Ogun State and to cooperate with every arm and level of governance to engender sustainable development of our land called and known as Ogun State, as well as ensuring that public funds are fairly appropriated and expended judiciously.

The foundation stone of the Ogun State House of Assembly Complex was laid in 1979 by Brigadier H.O.D. EGHAGHA. The Complex which comprises of the Assembly Chambers and Office Blocks was designed by Architects in the State Ministry of Works an Housing (Chief Architect J. Olatunde Beckley and Architect F. J. Batistauta). The Chamber is of a unique design and at inception was designed to seat 36 members. The sitting arrangement was based on the conference approach, a mass depature from the confrontational seating arrangement characteristic of teh Westminster model.

ROLES (FUNCTIONS) AND ACTIVITIES OF THE LEGISLATURE

Legislative Role: The primary function of the Legislature is Law making. The process could commence from the Executive desiring Legislative support for a policy, programme or project. A bill emanating from any agency in the Executive arm is called "Executive or Government Bill". It could also emanate from individuals who want government t oadopt a particular course, though this is sparsely done in this part of the world. This is called "Private Member Bill". A bill enjoys three readings and when it has passed the third reading, it is forwarded to the Governor for his assent.

Deliberative Role At the Ogun State House of Assembly, the deliberative role is being played extensively as various Resolutions covering virtually all areas of life of the people of the State and beyond are passed by this Assembly have been implemented the state government.
Financial Role: Out of the three arms of government, it is legislature that appropriates funds to the other two arms and even to itself. According to Section 120 of the Constitution of the Federal Republic of Nigeria, Appropriation Bill in respect of every incoming year is expected to be prepared and laid before the House before the end of the current year. It is also passed into Appropriation Law every year.
Oversight/Investigative Role: The legislature is empowered to direct or cause to be directed an inquiry or investigation into any mater or thing with respect to which it has powers to make laws. This is contained in Section 129 of the Constitution. As a way of complementing the State Government's effort, the Ogun State House of Assembly embarked on the investigation of the immediate past government's activities in the area of land allocation and acquisition with the view of putting things right in this area of the State's economy.
Power of Screening and Approval of Appointments: Constitutionally, appointments to the office of Commissioners of the State Government are made by the Governor after the nomination has been confirmed by the Legislature. Furthermore, in respect of performance of the role of screening appointees for approval of appointments, the legislature approves te appointment of members and Chairmen of Statutory Boards, Parastatals and Commissions. As a way of facilitating the workings of the State Government, the Ogun State House of Assembly has ensured that all political appointees presented to it were thoroughly screened based on the universally accepted template for carrying out such exercise.
Roles: In line with its constitutional powers, the Ogun State House of Assembly mediates in crisis that may cause disharmony among citizens of the State or that has the potentials of breaching the peace of the State, thus helping to relieve our Courts the number of cases referred to them.
Welfare Role: The Legislature performs functions that can be described as social/welfare role. With regard to this, Legislators see to the execution of what is regarded as Constituency Projects. Even though this role has been criticized at different fora in the past because some people believe such role should be left for the Executive arm to play. However, such projects have potential of uplifting the status of the constituents.

The primary responsibility of the Legislature is to make law. By the provision of Section 4(6) and (7) of the 1999 Constitution of the Federal Republic of Nigeria (as amended), empowers the State Legislature to make laws for the peace, order and good governance of a State or any part thereof.
The Legislature exercise its law making function processes as enshrined in the Constitution and/or Standing Order/Rules made pursuant thereto. The primary objective of any piece of legislation is to address basic issues that affect the lives of the people so that the conduct of government and its citizens are regulated to avoid anarchy. It is by means of legislations that STate administrations in Nigeria implement party programmes, react to the needs for basic changes in economic, social and political structure in the State.
Laws are made by the presentation of bills in the House and the assent of the Governor is obtained, except the House overrides the Governor's assent. All laws originate as bills. A bill (Other than an Appropriation bill) may be conceived and drafted by any citizen of the state. Only members (by regulation) are allowed to introduce on the floor Hallowed Chamber, Bills including those sponsored by the Executive and Private Citizens. To become Law, a bill must be read three times and passed by simple majority or a two third vote of the House.
At the time of introduction, the title of the bill is read to all members, after which it is given a number then referred to one of the House Committees of Reference for study and consideratin. The Constitution forbids the killing of bills at Committee stage and therefore all the bills must be reported with or without amendment, by the Committee which they are being referred for further consideration by the Committee of the Whole. A Bill reported from a Committee of reference goes to the Rules and Business Committee which controls the scheduling of Bills for consideration by the House.
When a Bill is scheduled for consideration, the House resolves itself to a Committee of the Whole to consider the measure. When the House sits as a Committee, the Speaker becomes the Chairman. While seating as a Committee of the Whole, the House would hear its Members for and against the measure. After a debate and amendment, if the report is aporoved by the majority, the Report of the Committee of the Whole is adopted by the House and the Bill is declared Passed on Second Reading.
On third reading, only amendments for the correction of errors or oversight may be made. The Bill may either be passed or ordered to be recommitted to a Committee by the majority of the members of the House. If the bill is passed by the House it is presented to the Governor who may Assent to it or Veto it. If he vetoes it the bill can become a law only if the House passes it again by not less than two thirds majority. However, if the Governor fails to inform the House that he assents or witholds his assents within 30 days, the bill shall become law without the Governor's assent. It is the duty of every citizen of the state to take an active interest in debates and deliberations of the House and participate in its Committee assignment which is usually open to the public.