Clerk of the House/
Head of Legislative Service 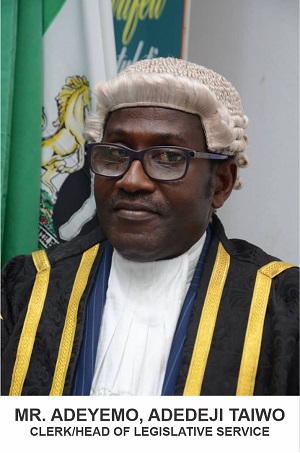 Adeyemo, Adedeji Taiwo came into this world on Thursday, 5th March, 1964 at Atambala Compound, Ajitadidun, Abeokuta, in the Abeokuta North Local Government Area. He is the first and Male of the only set of twins in the family. His father, Late Alhaji Adediran Lawal Abdul-Azeez. Adeyemo of Foyanmu family decendants in Olubadan Compound, Isale-Ijebu/Oja'ba, Ibadan, in the Ibadan South-East Local Government Area of Oyo State while his mother, Madam B. A. Adeyemo (Nee Adigun Adejumo) is from Adigun Compound, Ijomo Eyo Quarters, Ipokia in the Ipokia Local Government area of Ogun State.

He commenced his formal education at Oke Ona United Primary School, Ikija (Iberekodo), Abeokuta, in Abeokuta North Local Government, from 1972 to 1978. He, thereafter, proceeded to Muslim High School, Isolu in 1978, where he obtained the West African School Certificate in 1983, He was also at Ebenezer Grammar School, Iberekodo, from 1983 to 1984.

After a successful Secondary Education, Mr. Adeyemo proceeded to the Federal College of Education, Osiele, Abeokuta in 1984 and graduated in 1987 with a Nigeria Certificate in Education with specialization in Biology and Mathematics. His modest background, notwithstanding, he proceeded to the University of Ilorin, Ilorin where he obtained a Bachelor of Science (Education) Degree in Mathematics in 1995. Not yet satisfied with his academic achievement, Mr. Adeyemo was admitted by the Post Graduate School, University of Ibadan where he graduated with Maters Degree in Managerial Psychology (MMP) in 2005.

'Deji Adeyemo's Professional Career started in 1989 at Abeokuta Grammar School as a Parents Teachers Association (PTA) Mathematics Teacher and he later joined the Ogun State Public Service as a Secondary School Teacher in September, 1989 under the Teaching Service Commission.

In the Civil Service, he has functioned in different capacities. as an Administrative Officer, he served in various Ministries, Departments and Agencies which include the followings; Functioned as Deputy Director, Administration and Finance at the Ogun State Hospitals Management Board between 2000 and 2004. He also perform the same function at Bureau of Lands and Survey from 2004 to 2006 and as the Director, Service Matters, Bureau of Service Matters, Office of the Head of Service in 2006, and later Director, Planning, Research and Statistics, Director Committee, Director Table, Acting Clerk and Deputy Clerk all at the Ogun State House of Assembly from December, 2006 till 8th June 2020.

Mr. Adeyemo was appointed Clerk/Head of Legislative Service of Ogun State (CLA/HLS) on 28th March, 2019 and was confirmed on Tuesday, 9th June, 2020.

Deji Adeyemo is a Full Member of the Chattered Institute of Personnel Management (CIPM).

Mr. Adeyemo had attended several Seminars, Workshops, Conferences and Trainings and Official Meetings both at home and abroad. Hence, he is widely travelled to countries such as Republic of Benin, South Africa and Namibia all in Africa, France and Germany in Europe and the United States of America.

The leadership qualities in Deji manifested early in life as it earned him various positions of responsibility. He was the Assistant Senior Boy at Oke Ona United Primary School in his final year at the school. He became the Time Keeper in Muslim High School when he got to Form 3.(now J.S.S.3) and he became the Senior Prefect of the School thereafter.

While in Teaching, Mr. Adeyemo was the pioneer Secretary of the Association of Secondary School Teachers (ASSOSEST), Abeokuta North Branch ( Now ASUSS) and in 1996, he became the Chairman of the Nigeria Union of Teachers, Abeokuta North Branch, the position he held until he transferred his service to the Civil Service Commission in year 2000.

Mr. Adeyemo belongs to a number of religious and social organizations where he has contributed his quota to their various advancements. He was Assistant Secretary and later Secretary, Muslim Community Central Mosque, Federal Housing Estate, Elega, Abeokuta, Member of Ar-Raheem Dawah Group, Member, Association of Sons and Daughters of Ipokia Local Government and Member, Yewa-Awori Civil Servants Forum, all in Abeokuta, Ogun State.

What stands 'Deji Adeyemo out apart from his sterling qualities is his philosophy of Putting Smiles on the faces of people by impacting positively on their lives. His hobbies include Travelling, Watching Movies and Physical Exercise.